Sitting on a plane for 12+ hours from Auckland to Los Angeles was not an option for us and there are not many good alternatives.  But there was one flight with a connection and layover in Tahiti of 22 hours. Our flight from New Zealand arrived in Tahiti at 12:30 am, 22 1/2 hours before we left due to our crossing the International Dateline. I can’t tell you how wonderful it was to walk off the plane into the warm and balmy night. On top of that we were entertained by ukulele musicians and a dancer plus being presented with a bottle of Tiare moisturizer. What a great welcome at such a late hour!

Directly across the street is the airport hotel that we planned to walk to but couldn’t because it was so late that the storage locker room was closed for the night and there was no way to get everything we had with us up the steep hill.  So we took the shortest taxi ride ever.

Nice views from our hotel room of the airport and Moorea.

For some reason we couldn’t get to sleep until 3 am and then woke up at 6:30.  Check out time was 11 am and we considered paying extra to have a late checkout so that we could be better rested for the 10 pm overnight flight to Los Angeles.  But since it is unlikely we will ever go back to Tahiti we decided to tough it out.  We got up and had the hotel’s continental breakfast, checked out but stored our luggage at the hotel, walked across the street and rented a car to drive the two lane 114 km/72 mile highway that circles the island. November is the beginning of the rainy season for Tahiti and when it becomes hotter and more humid.  Luck was on our side for a beautiful day, one of the very few without rain before and after our arrival. The airport is about 5 miles from the capital of Papeete and we first drove into the city to drive the island clockwise.  However, I would recommend a counter clock wise route to be on the same side of the road as the ocean. It’s a very busy city as the majority of the population lives there and it is the only real town of any size on the island.  We didn’t have a map other than the tourist brochure map that we got when our cruise ship docked back in September. All it noted was the road around the island with the tourist sites along the way. There was no choice but to muddle our way through Papeete.

Naturally we got lost but soon came to a complex of pretty buildings so we parked the car.  There was a big wrought iron gate but a side door was open so I walked in. A guard stopped me right away and said I shouldn’t be there. When I asked what building this was he said it was the President’s Palace. Oh! He was very nice and let me take some pictures and one of him too. Interesting that he was the one and only guard seen.  Evidently the president here doesn’t have to worry about his safety very much.

We finally got to the outskirts of the other side of Papeete and took a wrong turn and ended up in the parking lot of this college. The sky looks stormy in many of these pictures but it never rained on us. Actually the agent at the car rental told us the east side of the island would have very bad weather and for us to just stay on the west side.  I’m glad we didn’t listen.

There was a sign for three waterfalls and we turned off on this road. There is only one road that crosses the interior of Tahiti and it requires 4 wheel drive.  Otherwise, there are mostly spur roads off the circle highway that soon come to a dead-end because of the mountains. 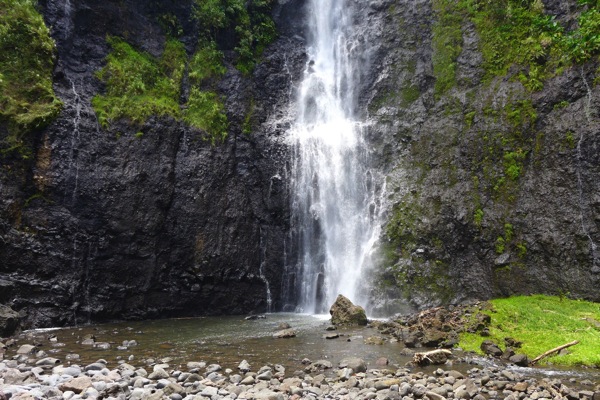 This is a very tall waterfall that drops into the small pool but I couldn’t capture it all. There were also two more waterfalls, however because of strong rains the day before the path was dangerous as rocks were still falling off the hills.  Actually there was a chain across a bridge at the start of the path to this waterfall but we climbed over it.

The walk is very pretty along side a stream 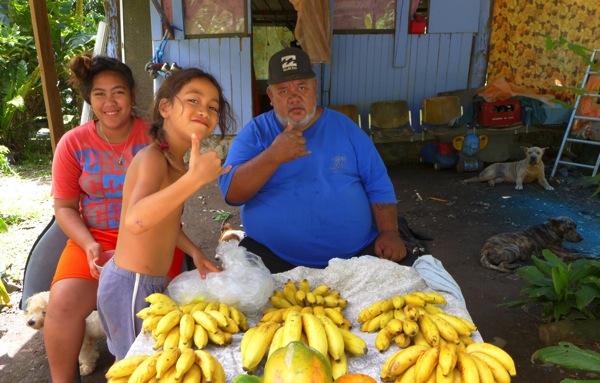 There were a few houses near the waterfall and like many homes, there was a table in the front with produce. We bought two bananas for our lunch.

Tahiti-iti is a fat tail like appendage off the southeast side of the main part of Tahiti. There is no road going all the way around so we just drove down one side.

Not a good picture but wanted to show you how there are so many waterfalls with pools at the bottom. The Tahitians love to swim and were having a good time here with music and the little ones climbed to the top of the falls and slid down into the pool.

The mountains in the interior came in and out of the clouds constantly. As far as I know, there are no towns inland. 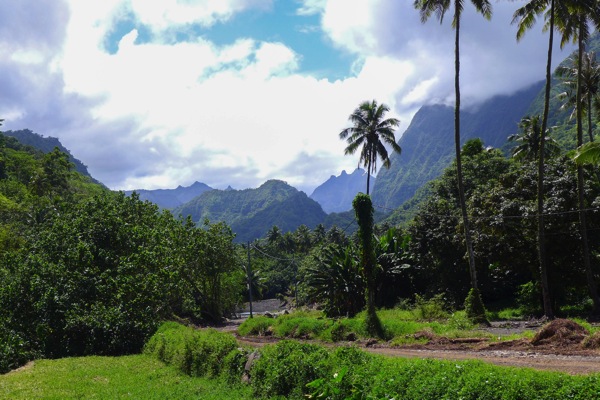 There are many very small beach areas but I never saw any wide and long beaches that you would imagine Tahiti might have. 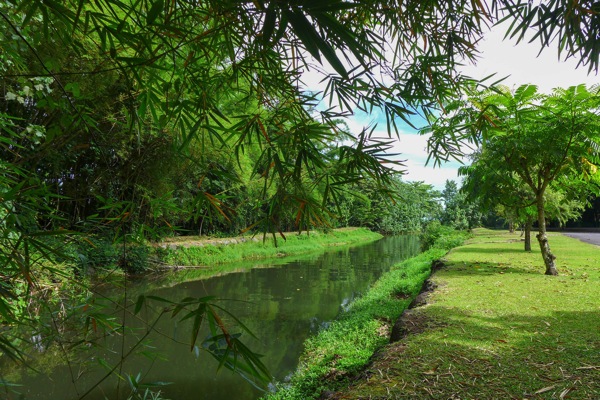 A driveway leading to the Paul Gaugin Museum was pretty but the museum was closed – seemingly for good. There is an attractive looking botanical garden next to it but it is also closed. 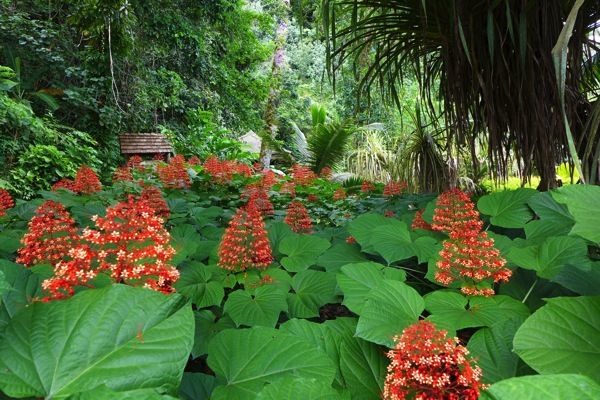 We had gone on a tour in September to the Vaipahi Botanical Gardens in the rain so we had to visit once more on this fine day. 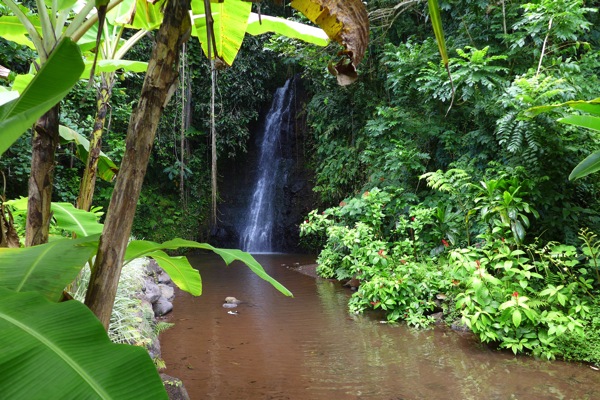 There are always people walking and riding on little motor scooters or bicycles to share the road with. The speed limit on the circle road is only 60 km/36 mph but everyone drives faster.

Every community has a pretty little church

What a wonderful layover and I would do it again.  Our Air Tahiti flight left at 10 pm for the 8 hour flight to Los Angeles where we picked up a rental car for the drive to Yuma, Arizona. Our dog Molly has been cared for by a friend who also let us keep our motor home in her yard. But Molly could care less about us anymore.  I am having to bribe her to get her to visit for just a few minutes in the motor home.  She will come around eventually and for now is just punishing us which she does every time we leave her.

We wasted no time entering the border town of Algodones in Mexico for what was our fourth country in four days.  Steve went to the dentist, got a haircut and we had lunch.  After being gone for three months, there is a lot to do and we are busy every day.  Then it is on a ship again to leave for Hawaii very soon. What a life!!