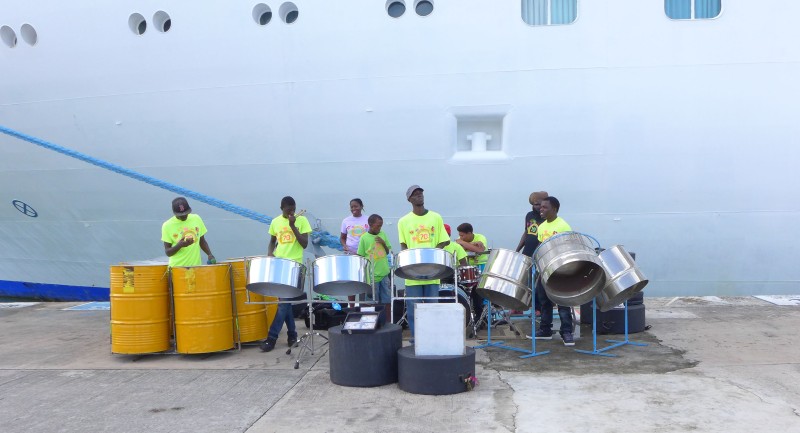 This particular cruise is what is called a “Journeys” cruise. What this means is that in every port local entertainers perform either on the pier or inside the ship. Local chefs also come on board and give cooking demonstrations and every lunch and dinner has a sampling of Caribbean dishes specific to the island we are docked at.

Antigua has a touristy shopping area right off the ship as do the other ports. I was immediately waylaid by a lady who thought I needed one braid on the side of my hair to keep it out of my face. $2 and just a few minutes was all she needed. I told her we would be back later.

This is Karen and her taxi. She approached Lauren and I wanting to sell us a little tour. It was time to see something other than port areas and off we went. 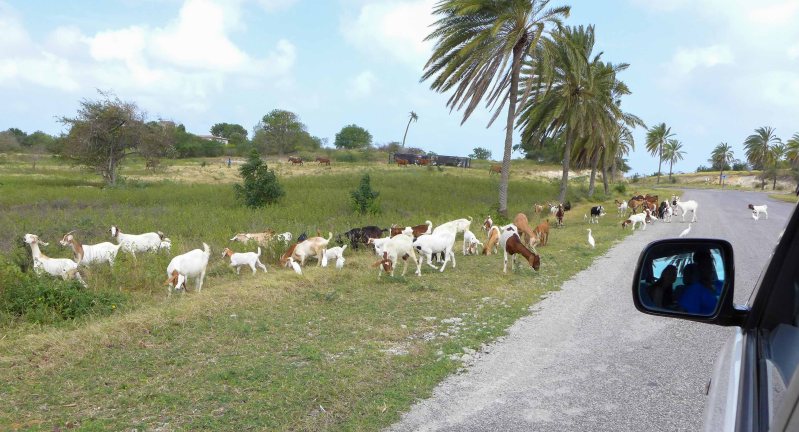 We passed by two herds of goats and they were being herded by dogs – with not a person anywhere. Karen said this is typical.

Antigua has a new sports stadium for cricket that the people are very proud of. There’s an opposite side just like this one. 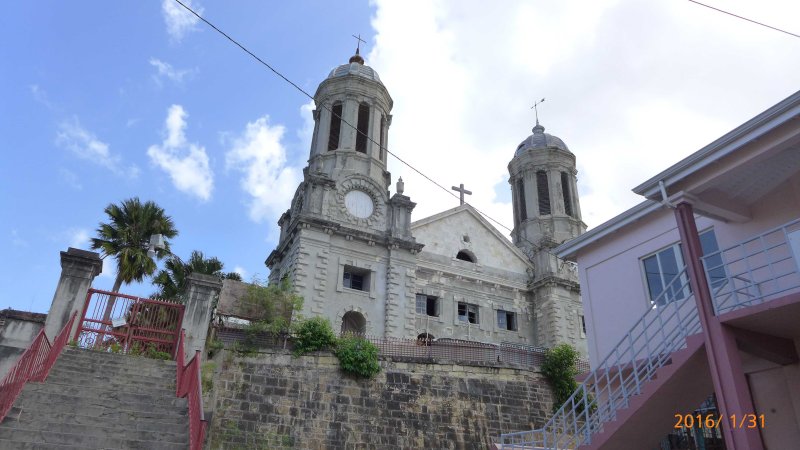 Other than this old church in St. Johns that is being renovated, we saw typical neighborhoods, the airport, a long ago shut down sugar factory, and houses along the beach.  We did see a modern looking medical college too.

Karen was a smart lady and very interesting to talk to. We learned there is no university in Antigua so the students who receive a scholarship go to Cuba. The Antigua government pays a small portion but Cuba covers the rest without asking for anything in return. There is very little unemployment in Antigua other than “the people too lazy to work”. Antigua is technically not in the Caribbean but in the Atlantic Ocean.  When the tourist season is over Karen goes to New York and works as a chef. Gas is $5 a gallon because it has to be shipped in.

Karen, as well as another local that I talked to wanted to know what we thought of Trump and what is wrong with all those people who like him.  When a music store owner asked me that I told him we might move to Antigua if Trump got elected. He said good and that he would take care of me because he wanted me to be his mother-in-law, meaning he had eyes for Lauren.

After the tour was over the corn row lady was waiting for me. She took Lauren and I to a rooftop where another woman from the cruise was getting a full head braided. There were no mirrors and so I couldn’t see what she was doing but it seemed like she was parting my hair in a different direction than I thought it should be for just one braid on the side. Pretty soon it was obvious she was doing more than one braid and I asked to see a mirror. Egads! She had done 4 braids going backwards on my head and since they started in the middle it would look very strange without having a few more. She said she thought I would need 8 and I reluctantly said okay. Well she did 10 and then wanted to do the right side too which would have been 20 braids and $40. At that point I said enough and gave her the $20 and left. As soon as we got to the ship I took them out.  That is known as the corn row scam and no you can’t see the picture Lauren took.

Like Loading...
This entry was posted in Caribbean, Cruising and tagged Antigua, Caribbean, CarnivalCruises, cruising. Bookmark the permalink.