With this stunning view from every room…… 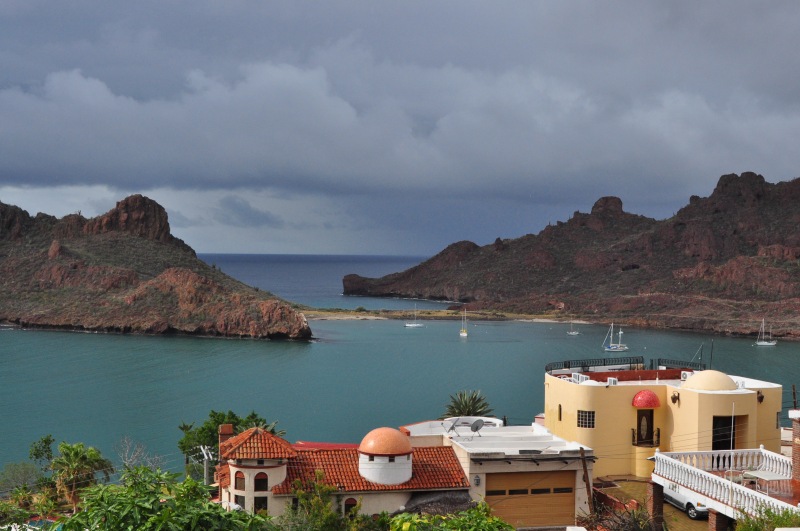 Before I tell you more, let me explain a bit. After we returned from the South America cruise we went back to Yuma, Arizona where our motorhome and car were stored at a friend’s house. We had planned to stay a few days and then leave for Mexico but I immediately had a relapse of what I had on the cruise and had to start all over again on the two wretched antibiotics and then follow up with tests to rule out anything really major. All is okay now but it delayed our leaving for a month.

As usual, we wanted to go to Mazatlan but I was afraid of another relapse and wanted to be closer to the border in case we needed to hurriedly return to Arizona.  99% of all people who drive their motorhomes down the Pacific coast of Mexico make their first nights stop in San Carlos, 240 miles from the border and just 300 miles south of Tucson. We have been here often but only stayed 2 or 3 days before going further south.

We stayed at Totonanka RV Park as always but this time we were flabbergasted to see it so full. There are 135 sites with only 4 left when we drove in and they were all gone a few hours later. After that, motorhomes coming in had to park in the aisles. This was wonderful to see after being so empty the last 8 years with people afraid to travel in Mexico by RV.

We met two neighbors near us right away and one of them said that two days later Remax was having open houses. The next day they gave us a sheet with the addresses and we thought this was a good chance to see what the inside of houses in Mexico looked like. We immediately liked the first one we looked at and even went back to see it again. In fact we liked it so much we seriously considered buying it but wanted to see more houses to be absolutely sure.

So I made a list of houses I had found online and the next day a realtor took us around. All of them were super nice and such a bargain compared to US prices. But when we walked into the 4th one we knew without a doubt that was the one. Wow and more wow. Now Steve normally has to think things over for a long long time before he makes a decision but as soon as we left the house he asked the realtor (without asking me but that’s ok in this case) what he thought we could get the house for and that we wanted it. The realtor would only say that the owners had turned down several offers below the listing price. Nevertheless, we offered less than asking price and it was accepted!  We moved in 17 days ago.

I know you want to see more pictures so here are just a few of the many I have taken already.

Many of the houses in Mexico have walls around them with metal gates. The 2 car carport is partially seen on the right and there is a courtyard with potted plants on the left. We want to make the courtyard lush with more landscaping.

This part of San Carlos is called the Caracol Peninsula. It’s a hill with about 350 actual lots but some houses are built on double lots and quite a few lots haven’t been built on yet. There are currently about 200 houses with a few more in the process of being built. The real estate market has suddenly heated up and 5 contracts were written just in the Caracol the week we signed ours.

All of the pictures I am showing today were taken from our house. The flowering bushes are the neighbor’s on our left.

There are always boats to watch as the entrance to this bay, called San Carlos Bahia, is at the left end of our peninsula and the San Carlos Marina is around the bend on the right. The Sea of Cortez is on the other side of the narrow spit of land behind the boats. 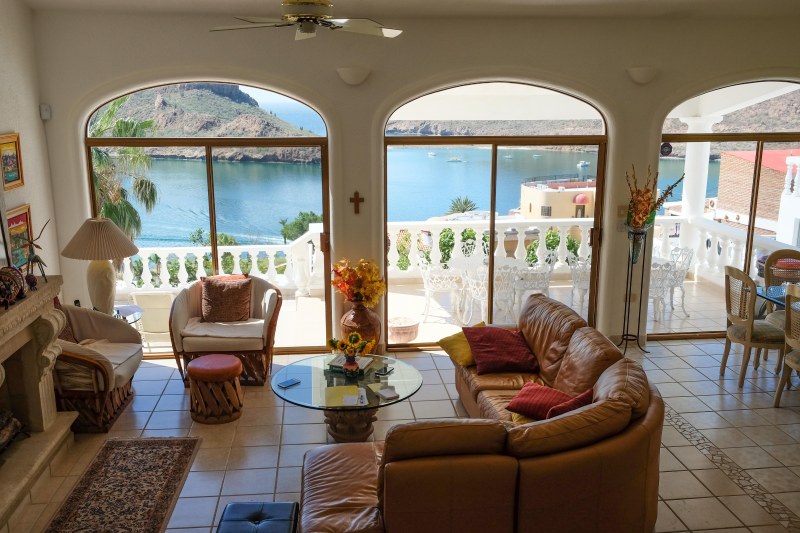 I feel like we are staying in a five star hotel for a one star price. To give you an idea of what we paid for this house, it was much less than what the median price of homes in Colorado Springs is. So now you have homework to do. 🙂 Included in the price were all the furnishings.

I like the Romeo and Juliet balcony out of the guest bedroom.

The previous owners said they spent all their time in the front so they could chat with neighbors walking by. 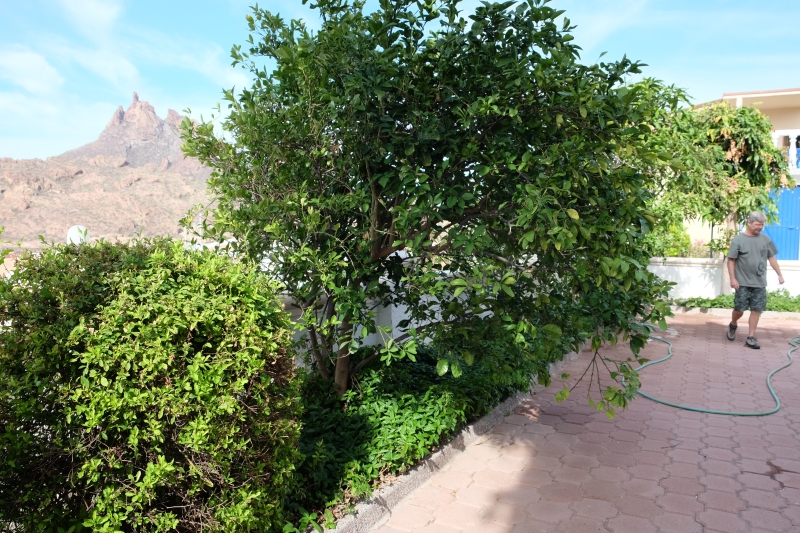 We call this area at the bottom of the lot The Orchard as there are 4 orange trees, 1 grapefruit, and 2 mango trees planted along the two sides of the pavers.

For days we had been catching a wonderful aroma and finally saw these new orange blossoms. Wonder what it will be like when all the orange trees are in full bloom.

Can you imagine what it would cost to live in an area like this in the U.S.? Not even close to possible except for multi-millionaires. I am happy to answer any questions you might have through the comments or the Contact Us tab.

This entry was posted in Mexico, San Carlos. Bookmark the permalink.