Steve’s Topeka brother had a vacation planned to Colorado leaving two days after their father died and so it was fortunate timing for us to be there for his mother and to also be in town for a funeral that we thought would happen in a few days. Two more weeks and we will return to Kansas for it. Steve’s mother doesn’t cook so we went out to eat quite a bit and I fixed a couple of meals. Steve tossed and rearranged in her apartment for two days. Then a sister and another brother arrived from different states and they took over in getting rid of Steve’s dad’s clothes and throwing out more from the storage room. I’m sure next time Steve goes to Kansas that more “stuff” will appear and so there will be another sort and purge. 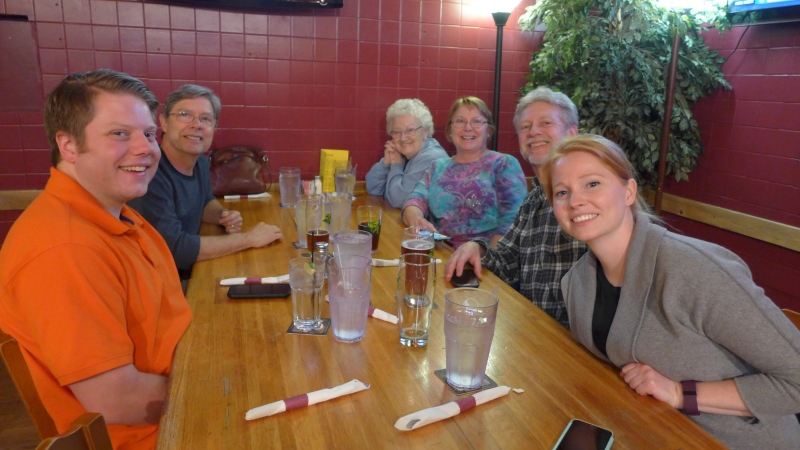 A nephew, Steve, his mother, his only sister, one of 4 brothers, and a niece

Steve’s sister and brother surprised us with a visit at the campground just as Steve was repairing a leak where rain had come in at the edge of a vent fan. That was the only leak after many days of rain and now it is fixed.

Finally, the day before we left, Steve and I got away to the botanical garden in Shawnee Park where we stayed. It was more beautiful than it was the last time when we were there September 2013 because of the tulips blooming around the park. We even went back again the next day and half the tulips had been taken out as some of the blooms were not so fresh anymore. 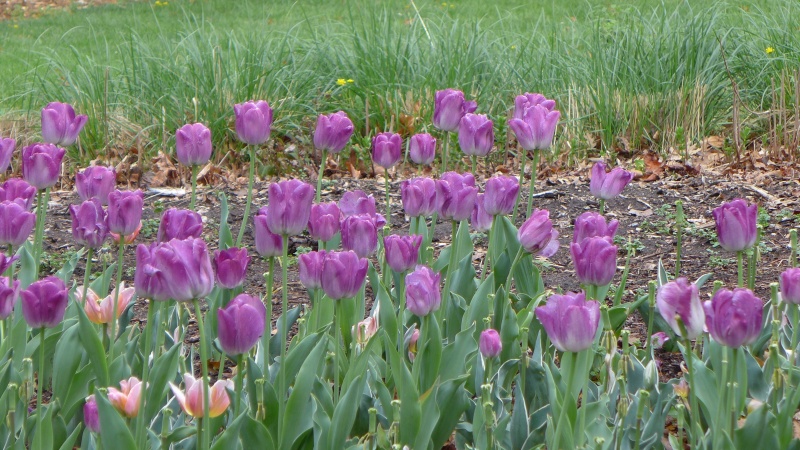 And speaking of tulips, our Tulip, the little motorhome that we sold in March went on a trip to New Mexico with her new owners. I had warned them that Tulip was famous. Actually I was kind of teasing because of the decals we had put on her and almost removed before putting her up for sale. Anyway, they were approached by a couple in a similar motorhome that right away knew who Tulip was because of my blog. Now that was a feel good day! Thanks Rhonda and Steve (new owners) and Jud and Liane (blog readers).

Picture is courtesy of Rhonda. We do miss the ease of getting around in Tulip that is for sure. But the trade off is having a much better living situation and since we spend many more hours living in a motorhome rather than driving one there are no regrets.

When we left Topeka we still didn’t know where we would go after Branson, Missouri because it’s too far to Kentucky and then back again to Kansas now that we get half the gas mileage as before. And we would be rushing too much to drive from Kansas to Texas in time to see friends that were leaving. So we have stayed in Branson almost two weeks trying to figure it out. We both like Branson quite a lot and don’t mind being here one bit. There is beautiful natural scenery with water everywhere, hills, rock walls, a state park with nice walking paths, and plenty of greenery. It’s an easy little city to drive in with good shopping. Probably the main thing Branson is famous for are the shows, mostly along one boulevard. There are 60 different shows going on now but we haven’t gone to any. It’s just not something we like to do.

What we do like, is Branson Landing. It is a long waterfront promenade on Lake Taneycomo of shops, entertainment, and restaurants a block from downtown Branson. But the best part is a 7.5 million dollar water fountain spectacular, synchronized to light, sound, music, and fire. It goes off every hour beginning at noon and lasting until 10 at night. However, there was severe flooding in Branson last December and the fountain was damaged. We went to Branson Landing multiple times with just one goal and that was to see the fountain. It was working only once and that was during the daytime. We really really want to see it at night but have only a few more chances before we leave.

View from the bridge that crosses Lake Taneycomo. It’s a very short drive from Turkey Creek RV Village to Branson Landing. There’s also a big city RV park underneath this bridge on the city side. 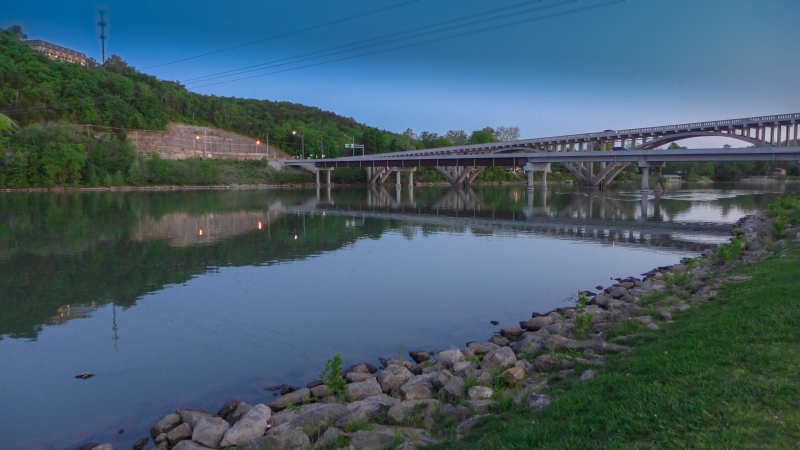 The RV park we are in is just 1/4 mile on the other side of the bridge. This is the shortest route to the RV park but also the absolute wrong route to take with an RV as we had to go through downtown and take a right on a busy two lane city street where it was impossible to swing wide. The concrete post of the light there has been hit many times but Steve managed to miss it.  He is still very traumatized from my poor navigating. 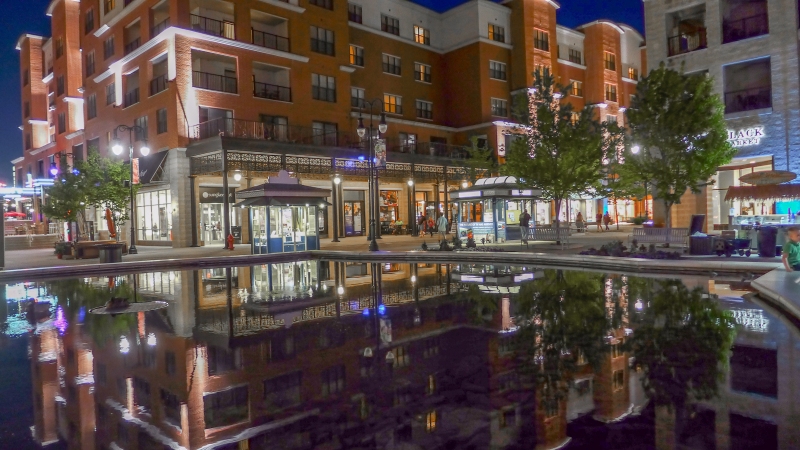 Hundreds of condos are above all the shops the length of the promenade at the Landing. 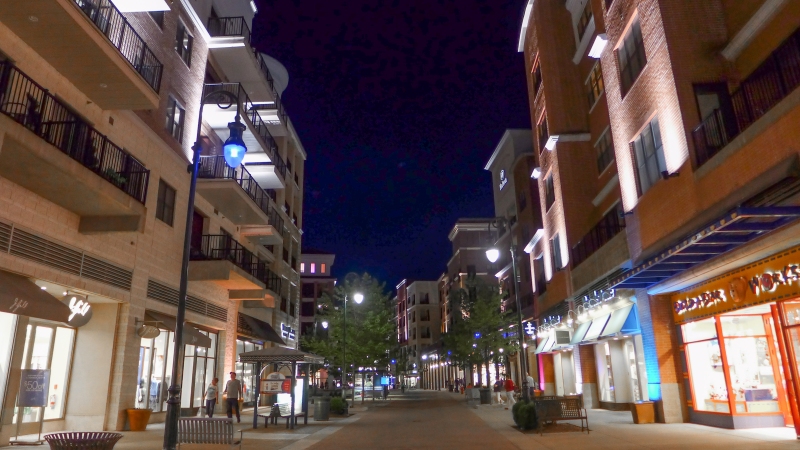 When the fountain is functioning properly, fire shoots out of these tubes at the back of the fountain.

Molly went with us last night and was she the hit of the Landing. At one point, five ladies were crowded around her. Person after person came up to us asking permission to pet her. Not just because of last night, but every single time we are out, we meet the friendliest people ever. Really, we have not ever been anywhere that is as friendly and nice as Branson. Too bad Branson isn’t out west for us to visit over and over because that is mostly where we will be in the RV.

And we had some excitement four nights ago. Readers in the US may recall the severe weather warnings that there would be many tornados in the midwest. Our area’s forecast called for a very slight 10% chance of a tornado. It began raining and thundering around midnight but we went right back to sleep. At 2 am the phone went off with the severe alert sound and the message to get to shelter immediately because of a tornado nearby. Then the sirens began. We could see people from the RV park going to the office so we quickly got dressed and joined them. There is a rock house with garage for the lawn equipment behind the office that is protected by a small hill and this is the shelter we were all crowded into along with our wet pets. Actually we were pretty drenched too after making a run for the office in the pouring rain. About 30 minutes later the alert was lifted and we returned to the motorhome safe and sound.

A huge limb came crashing down behind the RV across from us. Most of it had been cleaned up before I took this picture. And a house next to the office had a big part of a tree barely miss the roof when it fell. We never did hear of a tornado touching down in the area though.