After leaving the Flaming Gorge in southern Wyoming, we cut over to the western most highway in Wyoming to make our way north.

An old abandoned house where the property seems to be semi-maintained. 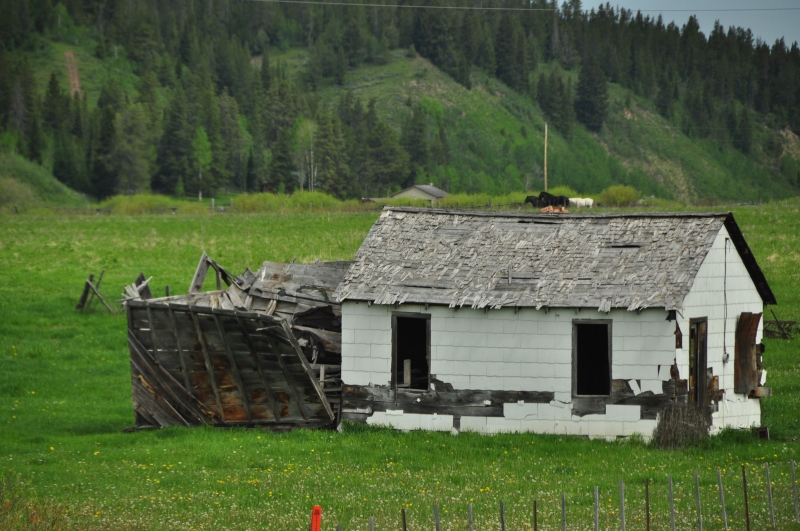 Sure wonder about these old structures and who lived here how long ago.

We spent one night in the quaint little town of Cokeville, sight of a school hostage situation by the town’s former marshall and his wife back in the early 1980’s. Last night Steve noticed a movie on Netflix called Cokeville and we plan to watch it for the whole story. 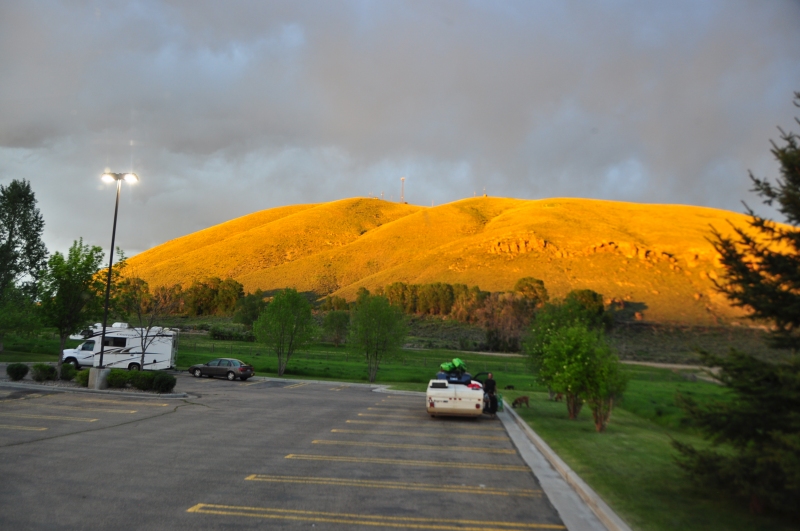 I thought it was a mirage when we saw a Flying J Truck Plaza, normally located on busy interstate highways, in little tiny Cokeville but here it is. Great place to spend the night as the trucks are on the opposite side of the station and there sure isn’t any traffic here. When we woke up in the morning there was a young couple sleeping on the ground in sleeping bags beside our motorhome. Guess they felt safe and unseen there.

Alpine, Wyoming is another small town in a pretty setting of meadows, mountains, the coming together of three rivers, and a huge lake called Palisades Reservoir. There are many new houses and businesses going up and soon the town won’t be so small. 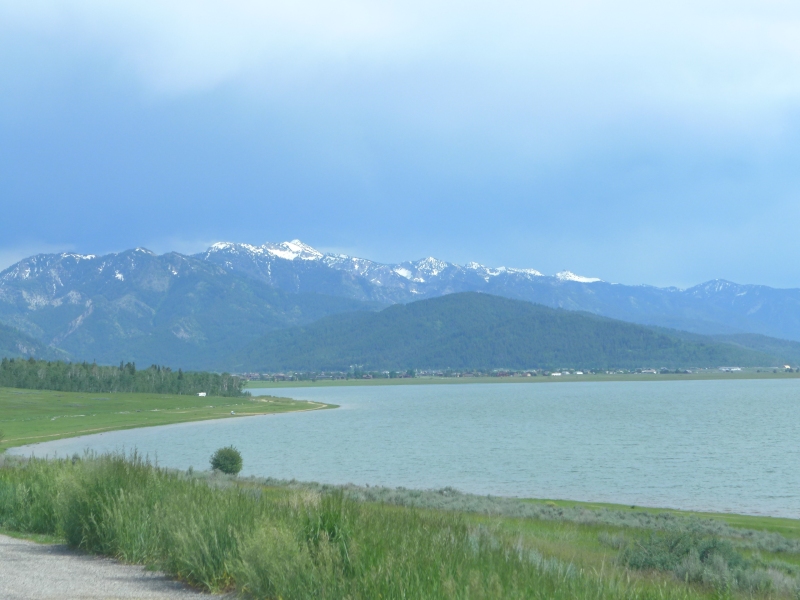 Alpine, Wyoming in the distance

We stayed three nights in an RV park in order to have a base to visit Grand Teton National Park. It’s a short, very scenic drive across a mountain range and along the Snake River to Jackson and the park.

The magnificent Tetons. I stood on top of the Jackson dam and took picture after picture on this perfect day. Steve and I were in this spot 19 years ago but it was overcast and drizzly and I didn’t see what was so Grand about the Tetons then.

Still standing on the dam, we can turn around and see the headwaters of the Snake River.

This is one of the few times that we wished we didn’t have a dog so that we could take a boat ride on Jenny Lake and take some nice walks. It was too hot to leave Molly in the car, we didn’t want to leave her clear back in Alpine in the motorhome for a long day, and dogs aren’t allowed anywhere in Grant Teton NP except the parking lots.

This is an Elk refuge between Jackson and Teton NP. I can’t resist photographing reflections. 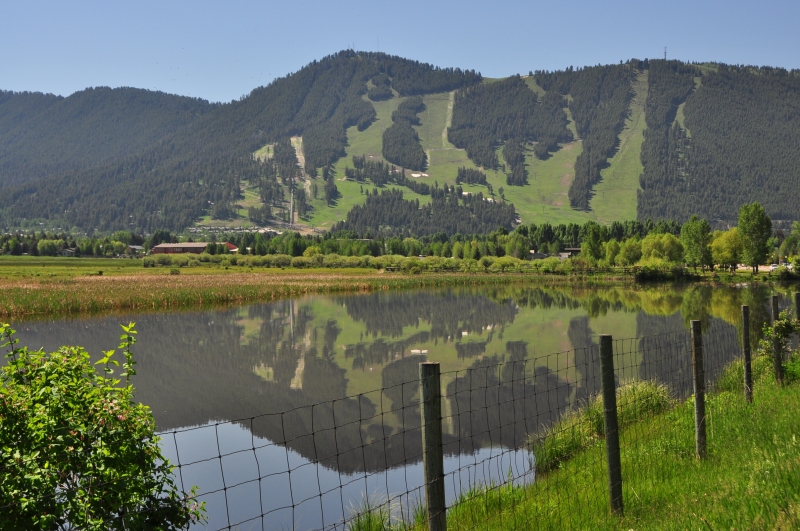 We left Alpine and followed the 18 miles long reservoir, which the Snake River flows into,
towards Idaho Falls where we had an appointment to get the leveler repaired. The RV repair facility told us the leveler had to be replaced as the shaft was broken and the cost to replace would be about $1500! Steve already knew he could install a new one himself and we decided to just order one when we got situated for a period of time. At least they didn’t charge us for the diagnosis.Idaho Falls has a pretty little park along the Snake River that allows 24 hour RV parking with a free dump and water. We did stay our allowed 24 hours but would not do so again as it is a gathering place for sketchy looking characters staying in tents and derelict motor homes. The police patrolled continuously and made one arrest that we saw.

Continuing on the next day, we drove north on the beautiful highway 93 in Idaho. Actually it is more than beautiful, it is breathtaking! There are not many cars driving this route and the going is slow but we were not rushed for time. Mackay is another quaint little town with free RV parking in a little rest area with water and dump and with straight on views of the highest mountain in Idaho, Mount Borah. It is almost 300 miles from Butte City, ID to Missoula, MT on highway 93 but every mile was so pretty.

Mount Borah, highest mountain in Idaho. I had to laugh at the Main Street sign in this otherwise remote looking setting. 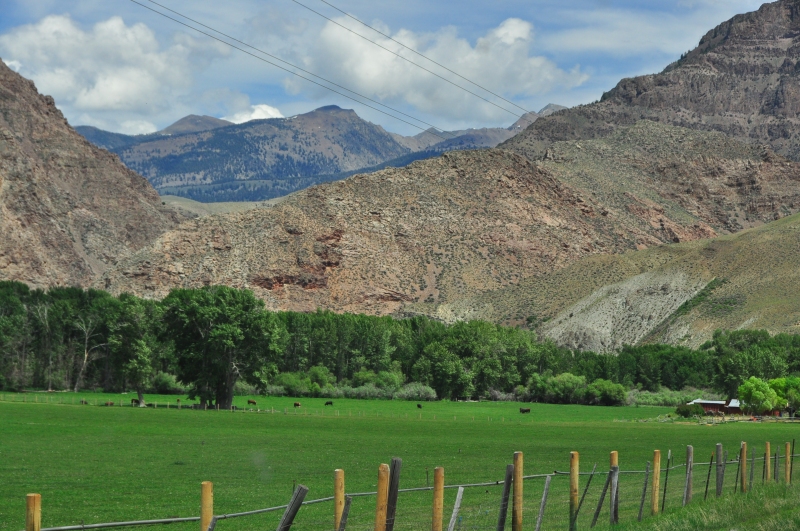 Along highway 93.  Just can’t get away from power lines and signs. 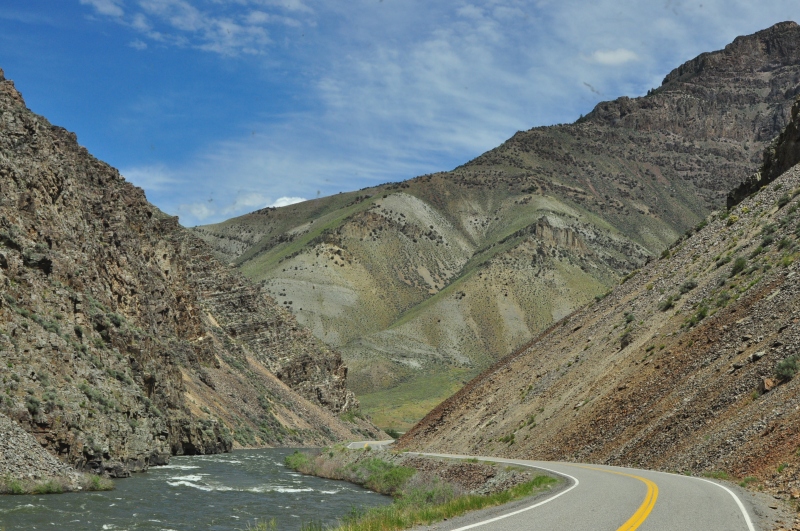 The Salmon River along highway 93 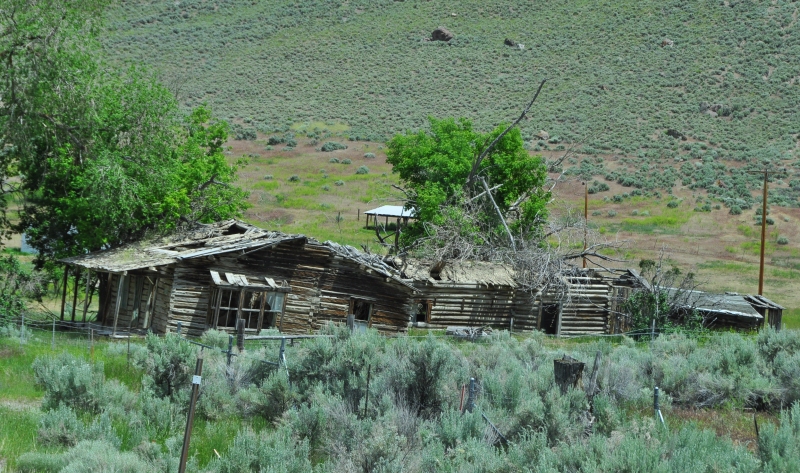 Once in Missoula, our two lane highway driving days were over for a while. We stayed the night in the Walmart parking lot in Missoula before heading on to Washington the next day. We still had some time until our expensive RV park reservation on the Olympic Peninsula would begin so we decided to be extra thrifty and stay at a casino on the westside of Spokane. The Northern Quest casino has marked off RV spots and allows a free stay of up to 7 nights. There is a gas station right next door with dump and water and we were all set to not spend any money for a while.

The Northern Quest Casino has many restaurants. We especially liked the buffet and the Asian restaurant.  That is our little blue tow car – 13 years old and still like new.

But first we had to register with security. Steve wanted a beer which meant we had to go into the casino part. They had a no smoking room of machines and so I got a complimentary soft drink while Steve drank his beer. The only place to sit at was at a slot machine. What the heck! Seven free overnights and free non-alcohol beverages; I might as well give the casino $10 in the penny machine I was sitting by. That $10 turned into $150! But wait, there is more. Instead of the machine spitting out coins or cash, it gave me a ticket worth $150. The cashiers cage in the non-smoking room was closed and I didn’t want to go into the huge smoking part of the casino just yet. I held onto it until the next day to cash in but on the way to the cashiers cage stopped at the same two side by side penny machines and my $150 ticket turned into a $446 ticket! Wow! Okay, next day, I can’t possibly win again. But I did, and on the same two machines. The $446 became $782!! Day 4, I didn’t go to the casino. Day 5, I lost $130 of my winnings. Day 6, I lost $25. We had one more free day coming but I told Steve we had to leave before I lost even more. $627 ahead, not bad at all!

Finally, the day I had been waiting for so long to come was here and that was crossing the Cascades. The east side of the Cascades are brown and dry but slowly and surely the brown gives way to a greener and wetter scenery along with the allergy killing climate I crave. There are four or five highways that cross the Cascades in Washington. We had been across the three most northern ones but this time took the least traveled, two lane highway 12. 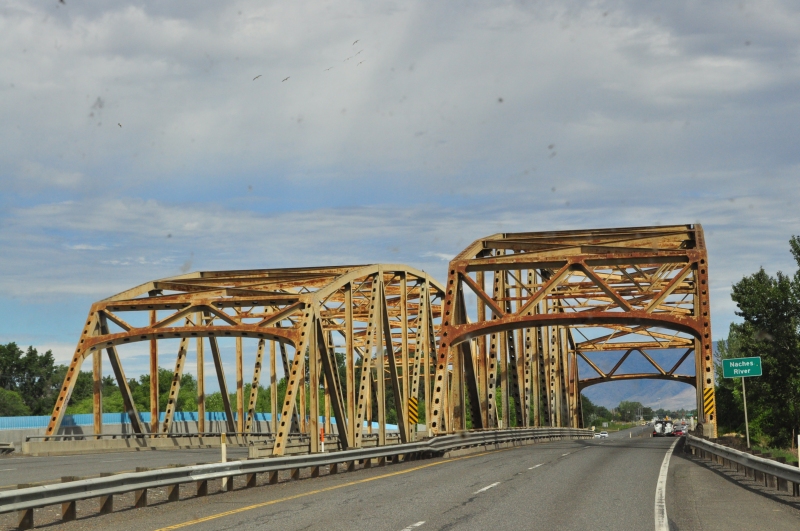 Getting closer to the Cascades and our windshield is bug splattered but I liked how the lighting reflected on this bridge. I could edit like crazy but if I had to do that I might never get a post done!

Nearing the top of the pass to cresting the Cascades, we came across a beautiful lake that was so still. This is actually the smaller part on my passenger side of the motorhome. 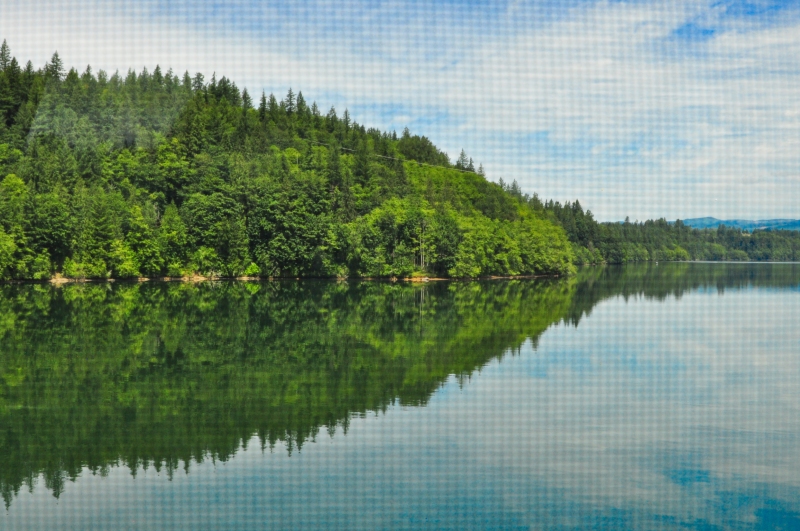 On the fly, no choice but to take this through my screened window. I sure miss small and nimble Tulip sometimes because there was no place to pull over with our big motorhome towing a car. 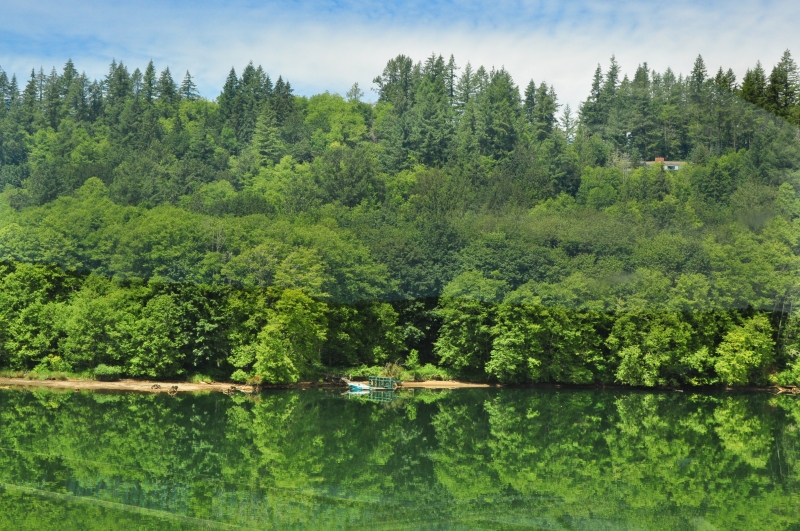 Such a pretty lake

We have driven to the Northwest from Colorado many times but by far this was the most scenic and enjoyable trip of all. You can’t beat the two lane roads.