Tower Hill Preserve, just to the west of Warrnambool, is an enormous volcanic crater rimmed by beds of volcanic ash. The swampy floor of the crater is punctuated by conical hills which, after good rains,  become islands surrounded by a shallow lake. The inside of the crater, and the island-hills are now a wildlife reserve and there are large populations of native birds and wildlife. 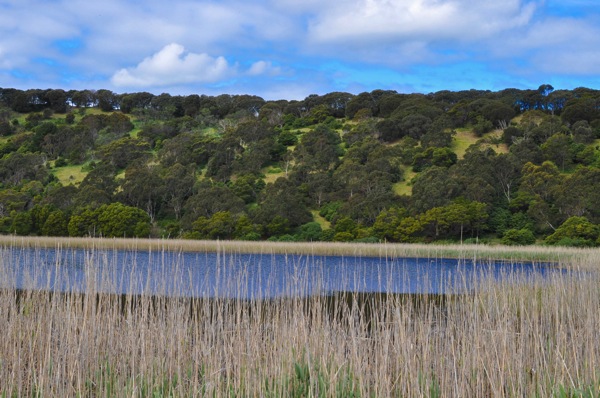 The hill is actually the rim of the dormant volcano and encircles the preserve below it. 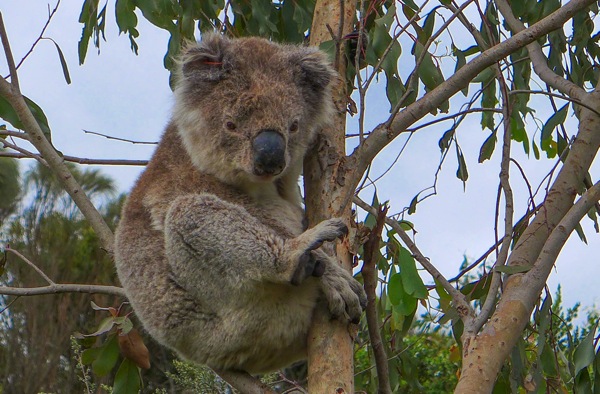 Steve spotted this koala as we were driving through the preserve.  They are sure laid back creatures – he could care less that we were taking pictures and staring at him.

He spent a good deal of the time scratching before climbing higher in the tree to begin munching on leaves. 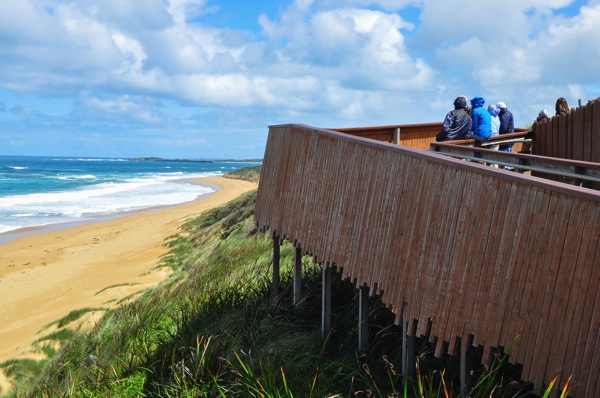 Logan Beach is a Southern Right Whale birthing area.  The whales arrive here in May and stay until October, giving birth while here. What seems to happen is, when they arrive off the coast, the pregnant females isolate themselves from the pod and search out a quiet location close to the shore to give birth, and then spend the next few weeks close to the shore while their calves gain strength. This behavoir pattern makes them one of the few species of whales that can be viewed consistently from the shore. There seems to be a number of favored locations along the southern coast where the mothers will shelter with their calves, Warrnambool, Victor Harbor and Bunda Cliffs are the best known of these.

We didn’t see any whales however it was a beautiful day to look at the ocean. These viewing areas with boardwalks are in many places that we have been to.  I might add that thus far we have not once had to pay an entrance fee to see anything in Australia.  We paid $3 to park on top of Lofty Mountain near Adelalide – that is all.

Happy day, I am now caught up as we saw the koala at Tower Hill Preserve this afternoon.  In the morning we start our drive on the Great Ocean Road, considered to be one of the most spectacular drives in the world.