3 Nov – There was one stop in between Port Chalmers and Picton called Akaroa that didn’t go too well.   The Captain had warned the night before that the forecast called for strong winds and since Akaroa was a tender port there might be problems.  Tenders are the lifeboats and when a port does not have a place to dock the ship, the ship stays off shore and passengers are ferried in the lifeboats/tenders.  Akaroa was a 30 minute ride.  I caught a bad cold (yes, again) and stayed onboard.  Steve went ashore for a couple of hours and when he got back he said the ride was very rough.  Before that, around 1:30 the Captain announced that he was stopping all the tenders from taking anyone ashore and would concentrate on getting the passengers back.  We heard that some people vomited and got wet on the return.

We were due to leave at 6 pm when the Captain announced there would be a slight delay (no reason given) and we noticed all but one lifeboat had been hauled back up and one was still out in the water.  We were sitting in the buffet dining room at 6:30 when an announcement came on for Mr and Mrs (us) to go to the front desk or call from a phone right a way.  The ship never announces passenger names and we gulped. I went to a phone and was told Steve was not accounted for as being on board.  When I told them he was, the lifeboat was brought up and we left.  What happened was that Steve carries both our key cards in his pocket. The key card is used for our cabin door, for purchases, and for scanning off and back on the ship.  Steve had scanned off with his card but back on with mine. Too late, he noticed what he did but there was a line behind him so he didn’t say anything.

But the sad part is that Steve snapped the best motor home picture ever while in Akaroa and I reformatted my memory card without downloading it to the computer.  It was one with a Sprinter chassis but the whole coach part was made from beautiful wood (probably laminate) with red flowers engraved and scrolled around the windows, fancy spindles on the back end, and just beautiful detail work everywhere – even around the edges and bay doors.  We really talked about trying to do that to Tulip because I know Steve could figure it out.

So here we are cruising close to the shore on the South Island.  It is mountainous and green all the way to Picton.  Picton is where the port is for the ferries that go between the north and south islands. It is about a 3 hour ferry ride across Cook Strait.

The town of Picton (no pictures) lies on an earthquake fault and by 2005 every single structure in the town had to be torn down and rebuilt if it did not meet earthquake building standards. Because of this, the whole town is rather uninteresting looking. 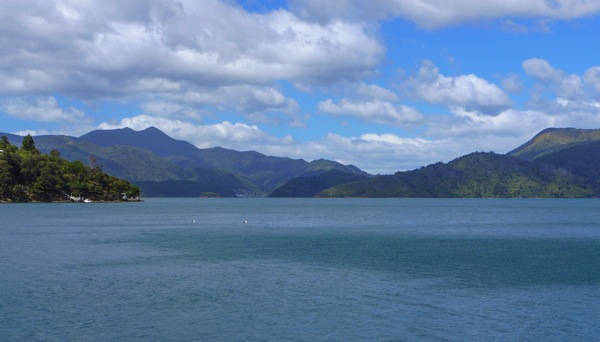 Here we took an excursion that was first by boat around part of the sound and then a bus trip into the countryside.

The boat captain/tour guide took us close to the shore of some of the islands to see the wildlife.  There are 10 islands and 8 of them are eco preserves.

These birds blend right in with their surroundings.  There are four birds if you can find them. 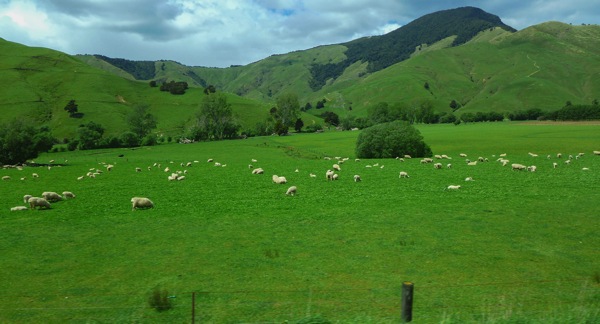 New Zealand used to have 70 million sheep but now “only” has 30 million because people have started eating more beef instead.

We had a 20 minute stop at Pollard Gardens in Blenheim where one lady didn’t return to the bus and several people went out looking for her.  Later someone in the town drove her to the bus. She had  wandered off and got totally lost.

New Zealand has some big trees