After spending three weeks at my mother’s house in Colorado Springs we decided to go to Oregon. I was having more trouble than ever breathing in the high altitude and felt terrible.  We stopped at my brother Herb’s in Greeley where we spent the night in our RV parked outside his condo building.  My sister-in-law Debbie fixed a huge and very tasty meal and later she and I went to Sprouts grocery store just a block away to get some fruit for berry smoothies. Boy, did I love sitting in their comfy Lazy Boy chairs and wished we had one in the RV.  In the morning Steve found a  poem that Herb left on the windshield that he wrote a few years ago called “The Watchers.” He is a talented writer with a mind like no other and is often a guest columnist for the Greeley, Colorado newspaper.

It is always very windy crossing Wyoming on interstate 80 and to avoid as much of that as possible we got up at 5 am so that we could get off the road early in the afternoon. Wyoming gas stations have a car lane vs truck lanes for diesel and they charge the trucks the lower advertised price and gouge the rest of us. We went to two gas stations and pulled right back out when we saw the price difference. So we went into Laramie and paid $2.39 a gallon vs $2.99 along the interstate.

Shortly after heading west out of Cheyenne the countryside turned white. I don’t remember seeing all the snow fences before. They go for miles and miles and make for intriguing scenery.

Later on, west of Rawlings, we came to a standstill for 1 1/2 hours due to an accident. We figured it must have been a doozy for as long as we were stopped.

The first thing we saw was the FedEx truck way off the highway out in the field. Then as we got closer we saw the other truck that was demolished. Not until I put the pictures on my PC could I see that it was actually two trucks one behind the other. Take a look at the contents. There were smashed bottles and cans of beer all over the highway that two men were sweeping up.

It looks like maybe the FedEx truck sideswiped the other two but it’s a mystery how it went out in the field so far.

We are at the Little America truck plaza near Rock Springs for the night. 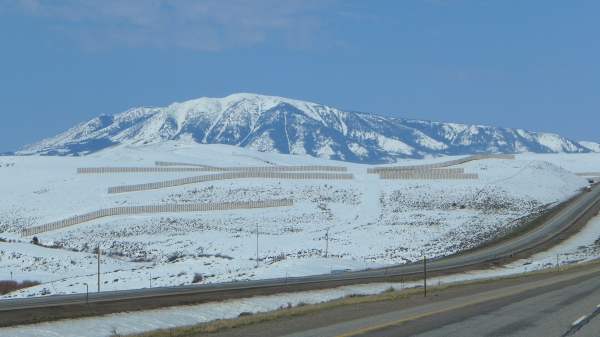 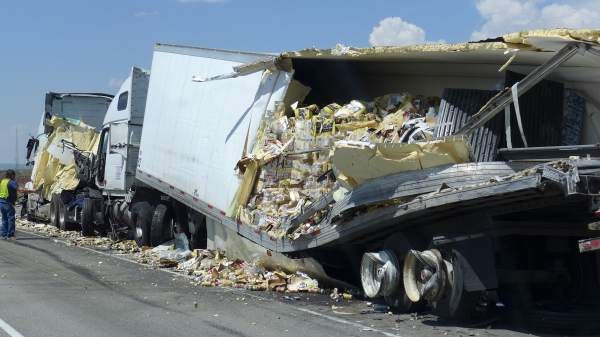 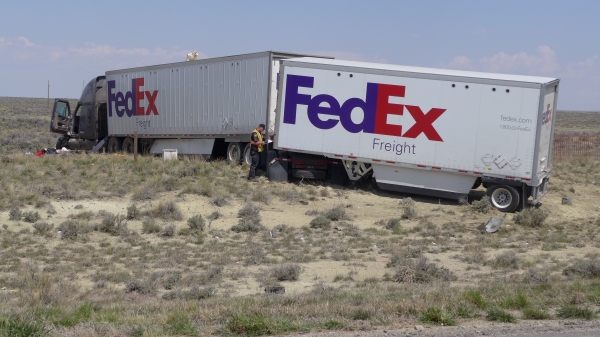