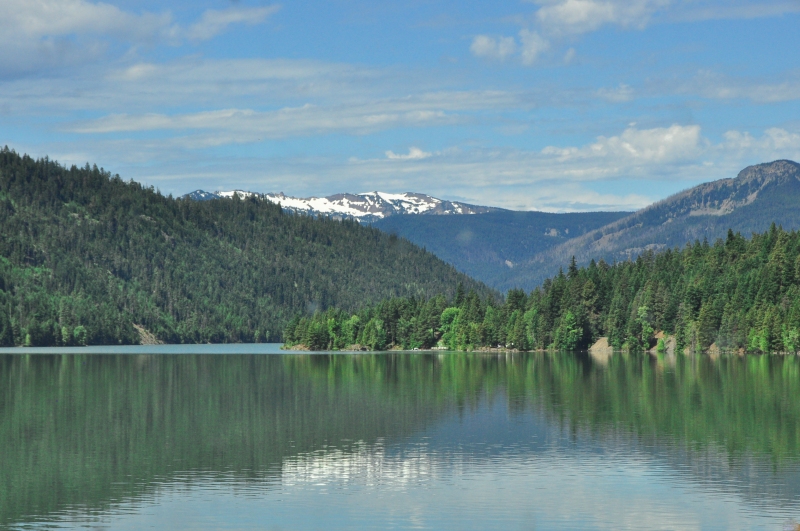 Having last left you as we crossed the Cascade Mountains, it is high time I brought you at least partially up to date. Our destination was an RV resort in Sequim on the northeast side of the Olympic Peninsula in Washington. In the past, we have always been frugal when traveling by motorhome but we had a smaller RV and were touring as opposed to actually living full time in an RV. We thought that just for once we would stay in a nice RV resort, take it easy, and sit a while with full hookups, cable TV, and wifi. Or so we thought.

We had made a reservation back in April planning to stay in an RV park for five weeks. However, due to the Lavender Festival that Sequim, Washington holds the middle of July each year we could only reserve 18 days, then had to check out for three days, and come back in for two more weeks. Gilgas Oasis RV Resort is a nice little park and so clean and tidy that you will not find a weed or spec of dirt anywhere. However, it is cramped and our views on each side and the back were of another RV close by. We were situated next to one spot where someone new came in every 2 or 3 days and we were awakened early most mornings to their rummaging in outside compartments and subsequent departures. We were ready to leave after just a few days and having the separate reservation for after the festival was a blessing because we were able to cancel it. For the privilege of having neighbors on top of us we paid $709 for 18 days for an average of $39.39 per night. So now it is back to our former method of travel that was more fun and definitely less expensive! 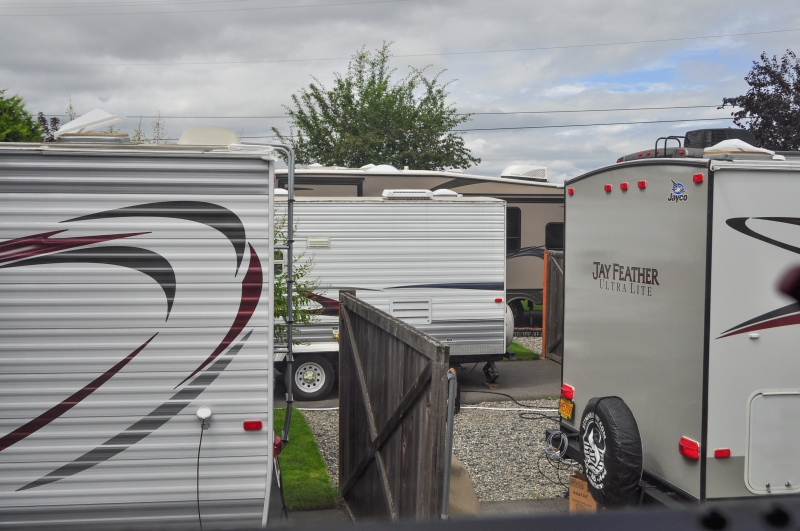 On the plus side we were right in Sequim, a town that receives the same low amount of rain per year as Los Angeles, 16 inches; whereas 40 miles away it can rain over 100 inches a year. This northeast part of the Olympic Peninsula has what is known as a rain shadow where the rain coming in from the Pacific Ocean cannot get over the nearby high mountains. Some people say that Sequim has a blue hole which it really does have as we saw day after day. There would be dark clouds and rain all around us whereas a big circle of blue sunshine appeared almost every day over Sequim. Sequim’s climate has been compared to Provence in France. 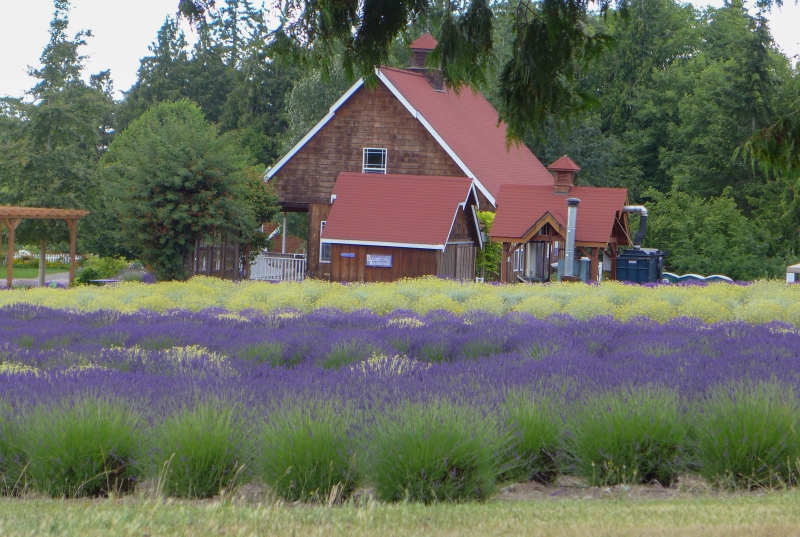 Or is this Sequim?

There is enough to see and do in this northeast corner of the Olympic Peninsula that we could have been somewhere different every single day.  For now, I think this is my favorite part of the U.S.  There is something about this area that feels so cozy and safe.  If I had a lot of readers I don’t think I would even mention having gone there because I want it to remain rural and uncrowded and just plain nice.

The town of Port Angeles is about 20 miles west of Sequim.  One of the first trips Steve and I took about 20 years ago was here. It is in a great location on the Strait of Juan de Fuca just a 90 minute ferry ride across from Victoria, Canada. We actually thought about moving to this area but felt the town looked too dreary and slightly shabby.  It has been spiffied up considerable since then with nice restaurants and a tourist friendly waterfront.  Actually the downtown is right there at the ferry port so it is all very convenient for parking in one spot and doing everything in one day.

You can see a glimpse of Canada in the distance 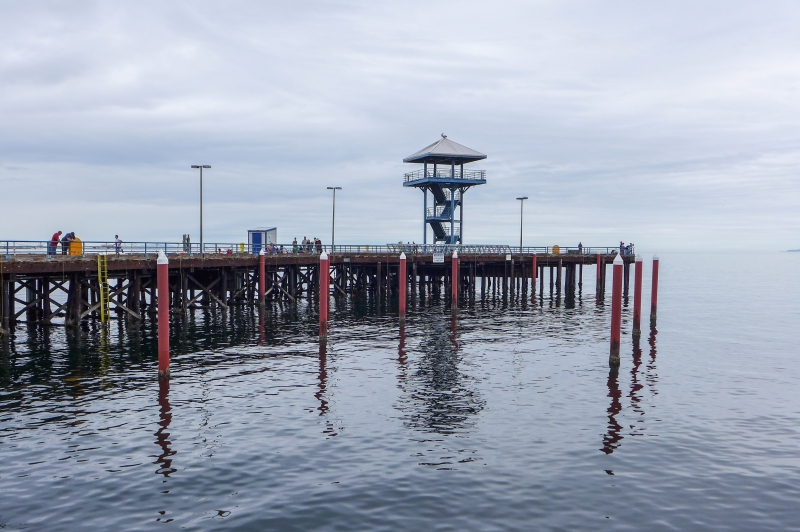 We went to the waterfront in Port Angeles more than once. Cloudy, sunny, rainy….it didn’t matter.

The easy drive to the top of Hurricane Ridge (elevation over 5,000 feet) in the Olympic National Park begins in Port Angeles.

There was a path on Hurricane Ridge lined with masses of these little plants, all with drops of water in the center that looked like diamonds.  This is one of those times I should have carried my bigger camera and not a point and shoot.

The weather was mostly very overcast on the peninsula so we were lucky this day on Hurricane Ridge when we could see the strait and Canada beyond. 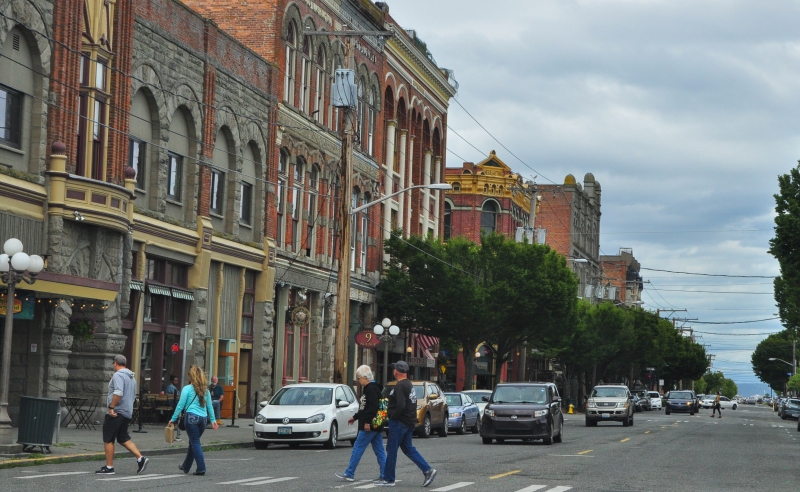 Another cool town is the old victorian town of Port Townsend in the farthest NE corner of the peninsula. It is surrounded by water on three sides making for some splendid views.

Fort Worden lighthouse in Port Townsend is fenced and not accessible.

After our 18 days we were on a mission to make up for paying so much money for what is not our cup of tea. That’s not to say we won’t stay in RV parks again for one reason or another. Mexico for instance is a place we always want to be in an RV park. Or maybe we will come across one that has more than postage stamp space.

Many people do not like casino camping but if the conditions are right, we sure do. The main condition is that we want it to be quiet and we don’t want to be parked where we must listen to generators hour after hour.

The view out one side of the RV from the Seven Cedar Casino.

Seven Cedars Casino is conveniently located between Sequim and Port Townsend and they even have free electric outlets for RV’s to use. There are also a couple of water spigots. How nice is that? We managed to get a spot back in the corner with a view of a meadow next to us with horses and nice landscaping and then country behind us. All for free and no gambling required but I can’t resist the buffets. 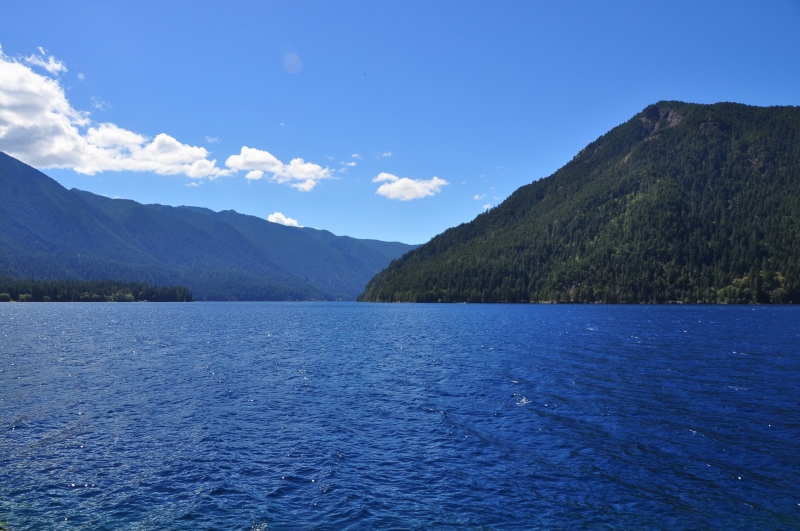 After more than a month in the northeastern part of the Olympic Peninsula we drove farther south, this time taking the Pacific coast route past Crescent Lake, the second deepest lake in Washington. It is 11 miles long.

Our next lucky find was a national park services campground called South Beach on the Pacific Ocean side of the Olympic National Park. This is a really small no reservation park with no hookups. The only way to get a site here is to start driving through in the morning as people checking out must leave by 11. The big downside to this park are the campfires. The wind blows constantly from the north to the south part of the park and so it is one big smoke pit in the evening but usually not for long thank goodness. Luckily the wind makes for ocean waves and that beautiful sound partially masks the generator noise.

Shortly after arriving at the South Beach campground these two girls came up to us to ask how to register for a spot to park their rental car. They had just arrived in Seattle and this was their first night to car camp in what was going to be a 6 week trip around the western US. I told them all the sites were full but we had room for them to park their car on our site. At the same time I recognized their accent as being Austrian and after asking where they were from learned they came from a small town not far from where I was born. When I told them I was born in St. Marien they were astounded because they were under the impression they would never meet an Austrian in the US and then to meet an American that was born in a farm town not far from them was over the top.  Also, one of them had birthday that day and the other the next day so we had a little celebration that evening in our motorhome. 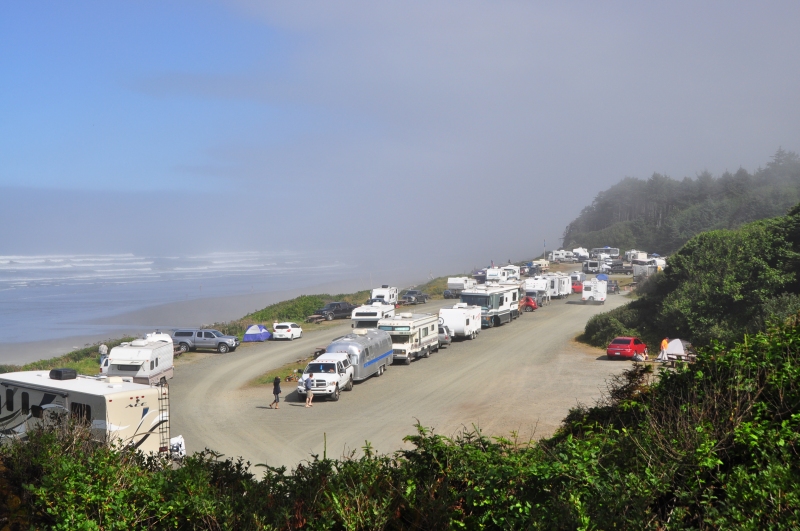 Next week we will have wifi at a city RV park for the first time in almost two months and I shall try very hard to catch this blog up. Until then, Servus! (Goodbye in Austrian).