It’s been so long since my last update that I’m not sure if I know how to write anymore.  We are back in our house as you might have guessed, but for how long remains to be seen.  It hasn’t taken long for the urge to be back on the road to strike again but we need to sit tight over the winter before making a final decision to sell the house. But then again we could list it tomorrow if the mood strikes us. You never know!

We left you right after leaving Oregon in July the last time I wrote so now I shall attempt to bring you up to date.  Our last nights in Tulip were spent at Rifle Gap State Park in Colorado.  Rifle Falls State Park is nearby and of course we had to see the falls. This park is often described as a bit of the tropics in Colorado because of the lush vegetation that the overspray from the falls creates.  It had been 10 years or more since we had seen the falls and this time they were hardly recognizable.  All the rain this past spring and summer has made for three forceful and thundering water falls.

Rifle Falls State Park also has a campground but it is very small and rarely has a site available unless reserved well in advance. It is along a creek and close enough to hear the falls.

We moved back into our house in early August.  That same week Molly tore a tendon (ACL) in a rear leg and had to have surgery. If it had to happen, this was the place because we have a wonderful and affordable veterinarian nearby. The surgery cost less than the series of office visits Molly had in Yuma last year that turned out to be a complete sham as there was nothing wrong with her.  It will take 4-5 months before she is completely healed and walking normally. Her hair grew back light blonde where she was shaved so that leg is a different color than the rest of her.

Our roof was getting old and we had some leaks so the first order of business was to get a new roof put on. Painful $$$ but we knew it had to be done, especially if we sell the house. These six roofers got it all done in one day.

Steve only went back to work week before last and so he had two months to do a lot of chores around the house without having to rush.  He painted all the trim after the roof was done and some even had to be sanded while he practically hung upside down leaning over from the second floor.  He is back with the company that laid him off almost three years ago which allowed him to join me in Mexico https://wanderlets.com/2013/01/06/nada/.  We would not be too upset if that happened again this winter. 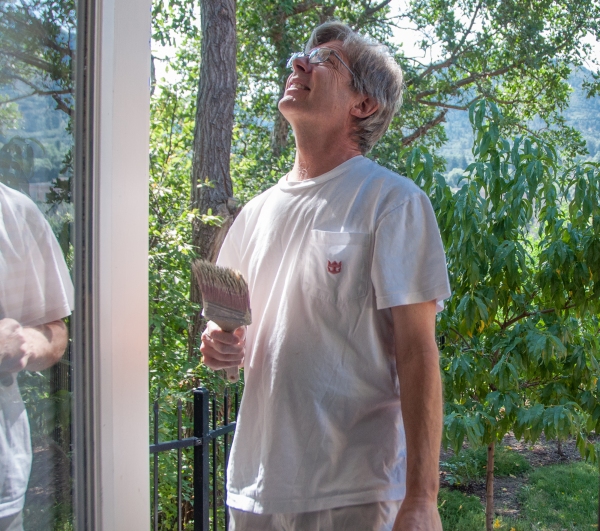 The weather has been absolutely fabulous for all the outdoor work that needed to be done.  In fact, we still have windows and doors open with this summer like weather which is abnormal at this time of year. However, that can quickly change and we will be in the deep freezer with a few feet of snow.  In the meantime, the nice weather is keeping our gas and electric bill low. 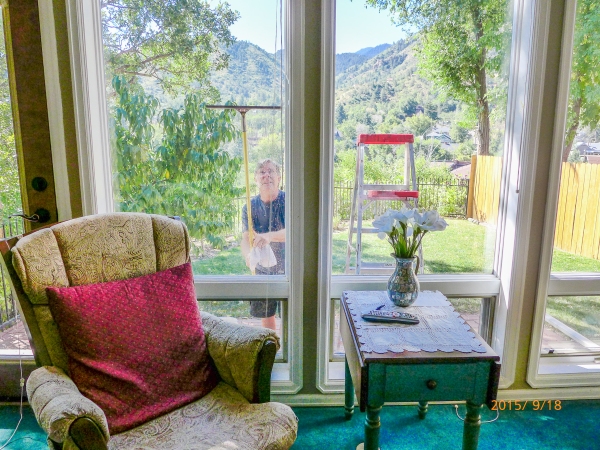 Steve washed all 43 windows on the outside which is quite the job because most are large and many are pretty high up. Now we just need to get all the insides done and the house will shine.

The very day after the renters had the carpets professionally cleaned we had to call back their carpet cleaning company two more times because of awful stains everywhere. We bought a Bissel Green Machine and then Steve did them again……and again……and again….and again. Yes, four times!  And each time the water was filthy.  For the first time our carpeting finally looks like it did when we had it installed 9 years ago.  That machine does a better job than the carpet professionals or any machine we have ever rented.  Too bad we didn’t buy it years ago and save ourselves a lot of money.

It is SO nice to have a roomy kitchen back. The main thing I dislike about our motorhome is having a small kitchen with no place to spread out and the inability to bring all of our appliances.  We have looked online at many motor homes and see several where the kitchen would be much more workable. Strangely enough, one of the shortest class A motorhomes out there has the best kitchen along with a roomy pantry. It is the Winnebago Vista 27N which also has 123 cubic feet of exterior storage. Our Tulip only has 16 cf which is nothing in comparison.  Too bad the Vista is gas and not diesel though.

Steve and I can cook at the same time again too. Here he is today making his speciality that is one of my favorite dishes. It is a caramelized brussels sprouts tofu dish that requires time and patience which Steve has plenty of. While he made this for lunch I made an Italian Smoothie (2 cups spinach, 1 cup raspberries, 3 dates, 3 figs, 1 apple, and a bit of water for the right consistency) in addition to a chocolate zucchini bread along with a salad. 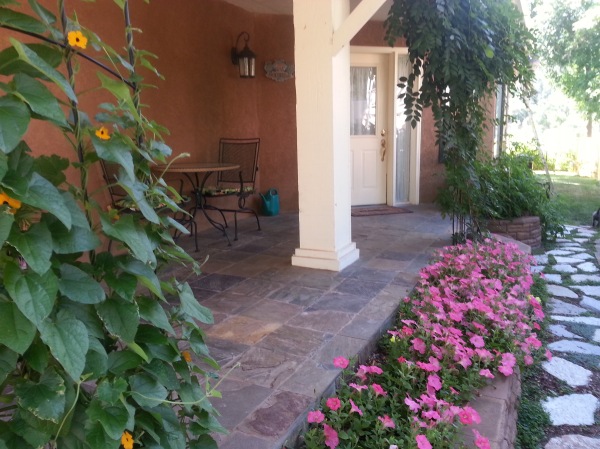 Our renters did leave our yard in better shape than we left it with new flowers and even an heirloom tomato plant that is still producing tasty tomatoes.  All in all, it is good to be home to regroup. And plan for what is next.